On the Road with Mia Mamma – Civita di Bagnoregio 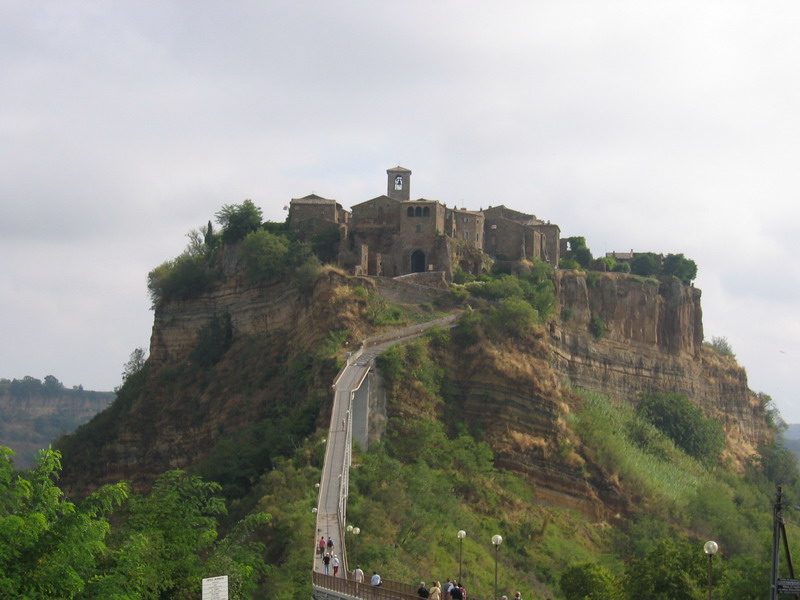 The drive from Benano to Bagnoregio is short – 40 minutes – and unremarkable. But the walk up the pedestrian bridge from the modern (in a 16th-century Italian kind of way) town of Bagnoregio to the otherworldly town of Civita is staggering. Bagnoregio is an ancient town nestled at the very tip of a hilltop. The walk itself is breathtaking, but the sense that you’re traveling back in time is palpable.

Our walk up to the old town of Civita helped us understand why the village is frozen in time.  The footbridge spans the gap where a hill once connected Civita to the rest of the world.  Over time, erosion made the hill increasingly steep, then eventually washed it away completely. Now, the town is a virtual island

connected only by this very steep bridge.  The walk was strenuous, and we were doing it empty handed and in very pleasant weather. The thought of doing it with groceries or pushing a stroller or in nasty weather (tempo brutto) makes the town’s isolation seem inevitable. The town that remains up there is startlingly evocative of another time – simpler, quieter, and very peaceful. You can check out the wikipedia description and photos here.

As is so often the case in Italy, our big meal of the day was also breathtaking! We stopped at one of our favorite restaurants in the area – Trattoria del Conte.  Paige had perhaps the best gnocchi that I’ve ever had the pleasure of tasting. This place looks almost like a truck stop, so part of the joy of eating here is the sense of being in on one of the greatest secrets in the area.

For anyone interested in the details, the restaurant is: Trattoria del Conte, along the Orvieto – Montefiascone highway, Localita Buon Respiro, 18 ~~Tel. (0763) 217047.  Here’s another, much more colorful, review from the terrific and inspirational food blogger Abigail Blake. She loves Italy and has stayed at Rocca di Benano. Entertaining writer that she is, she chronicled her family’s explorations of the “Greater Benano” area last year. Check out her posts from August and September 2009 for her reports from Italy. Her photos are beautiful, too.